View source
watch 01:36
We're Getting Mutants in the MCU - The Loop
Do you like this video?
Play Sound

Shenzibeth Callie-Belle "Shenzi" Tuck is a fanmade character created especially for the Disney franchise, and later the Rugrats/All Grown Up franchise.

As a toddler, Shenzi is very timid and is usually hesitant to jump into action. She tends to blush easily, and hide her face when embarrassed.

As a pre-teen, Shenzi is still timid, but starts developing more socially. She has some ditzy moments, but is overall very intelligent and loyal to her friends. She takes on a bit of the stereotypical nerd/geek, but has a personality of her own that drifts from it. She's a math whiz, but doesn't excel in science or phys ed. She has a fascination for the supernatural. As a teenager, she doesn't change much from her pre-teen stage.

One factor that separates her from all the others is the fact that she is extremely close with her father, Friar Tuck. Even as she grows up, they hardly drift apart if at all. As a toddler, she even rejected most of her new mother Felicia's attempts to bond with her, and shows jealousy when Friar Tuck does this with her new sister, Frankie. Although after the adventure in Lost in Manhattan, she learns to accept her new living conditions, deeply regretting her rejections and jealous outbursts.

In Lost in Manhattan, the first LiM story, Shenzi is very excited about a trip to New York City for Christmas with her family, her friends, and their families.

Shenzi has light purplish-grey skin, long black hair that reaches her lower shoulders, pointy ears, a small black nose, and eyes with different-colored irises. The left is blue, while the right is green. When she turns 4, she starts wearing thick, black eyeglasses, and starting at age 8 and ending at 15, she wears braces on her teeth. She is very embarrassed by the latter, and hides them as much as possible until Chuckie boosts her confidence. When she's 10, she starts hiding her blue eye with her long bangs from insecurities.

As a pre-teen and beyond, her clothing style is associated with that of emos, with a mix of goth and punk. In her long bangs, she wears extensions that match any color she wears other than black, except when she sleeps. Her finger and toenails have black polish. Surprisingly, for her young age, she wears revealing swimwear and tops in general.

As a teen, her physical changes from her pre-teen stage are minimal; She merely gets new glasses (cat-eye), and wears more extensions. Plus her braces are removed with physically positive results.

In Manhattan, Shenzi and Chuckie seem to bond immediately. So much that they miss each other just after leaving for home, and they're given photos of each other from their respective mothers.

Their bond tightens when they reunite after Shenzi, Frankie, and their childhood friends start attending Jim Jr. Junior High, where Tommy and his friends go to school.

Despite her contrasting view, Chuckie sees her as the most beautiful girl in the world, and deeply wishes that she could see it. It hurts him when she verbally puts herself down, whether it was from her own free will, or words from bullies that fill her thoughts with negativity about herself. No matter how many times he tells her, she believes that she's just not attractive.

After he comforts her about the fact that she needs braces, they share their very first kiss, only to end up having their braces get tangled together. Shenzi has a feeling of claustrophobia while the nurse helps them, and has to stay in the infirmary until the end of the school day. They decide to not count it, but change their minds after it becomes a funny memory. They survive their first bad argument, and their friendship grows for the better afterwards.

Near the end of the school year, Shenzi finally realizes that she has romantic feelings for Chuckie, since they reunited, after feeling jealousy when seeing another girl flirt with him. Thinking she's not his type, she goes to Angelica for a makeover, so she could look more light and feminine, as opposed to her usual dark, Gothic/emo style. But she learns that Chuckie has feelings for her as well, before she changed herself. To score a date with him, she reverts back to her former style and they start going out with each other more.

In their high school years, they become an offical couple after two months of dating. They, at one point, need to take a break when they have a problem, but don't break up. This leads to Shenzi getting kidnapped, but is rescued by Chuckie and all their friends after a few weeks. She ends the break with him, and their relationship is much stronger.

During a trip to Disney World to celebrate graduation, Chuckie proposes to Shenzi, and she excitedly accepts. In the epilogue, they have a happy wedding with their friends and families. During their honymoon in Paris, France, she tells him she has amazing news. As it turns out, she is pregnant!

Overall, Shenzi loves Chuckie with everything in her, and would do anything for him.

Since her infant days, Shenzi has been extremely close with her father. Other than when he unintentionally embarrasses her while she hangs out with Chuckie, they have no problems.

Shenzi has a good relationship with her mother, especially after the adventure in Manhattan. While lost, she vows to appreciate Felicia more than she had, instead of showing jealousy and playing favorites.

Shenzi has a tight relationship with her older stepsister, and despite their close ages, they hardly ever fight, if at all. Frankie gives support to her little stepsister when it is needed.

She has a good friendship with Tommy after they re-meet. He was actually the first in the group that she spotted and vaguely recognized. In Living Skills Class, she is paired up with him in a fake married couple for a field trip, to everyone's surprise.

Shenzi is good friends with Kimi. Along with Frankie, she seems to have the most belief involving Shenzi and Chuckie should get together.

Although they don't interact a lot, she and Phil are still good friends with no arguments.

Like with Phil, Shenzi is good friends with Lil, although they interact a bit more.

Shenzi is acquiantances with Angelica. There's an issue between them around Valentine's Day, when Angelica accuses her of stealing Sean Butler away from her, when in reality, he mistook her setup for a request involving him escorting her. Just after middle school ends, Angelica gives Shenzi a girly makeover to earn Chuckie's romantic affections, even letting her borrow her clothes, and a swimsuit for a weekend beach trip.

Shenzi and Susie become friends after getting introduced to one another.

Shenzi was best friends with Maxie, before they started attending Jim J. Junior High School. After bonding with Chuckie and Tommy respectively, Shenzi and Maxie drifted apart, but are still good friends.  Matt Goof Shenzi has been good friends with Matt since he was born. She wasn't fond of him hitting her and everyone else (except Santana), but still considers him a friend.

Shenzi has been good friends with Bobby since their baby days. In Lost in Manhattan, it's hinted that Bobby had a crush on her, but it quickly deteriorated.

Shenzi as a preteen 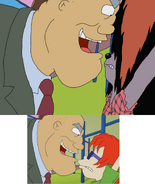 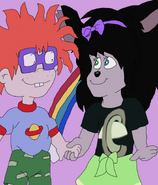 The first Sheckie fanart ever drawn

Community content is available under CC-BY-SA unless otherwise noted.
Advertisement